On November 15, at 1:00pm Eastern, SPARC will host another online discussion through the openaccessweek.org network, to gather participants and talk through this year’s milestones, experiences, and goals for 2012. Please save the date and watch for more post-OA week news from SPARC, the official organizer, later this week.

This service is a part of the project "Development of OAI-Based Institutional Research Repository Services in India", sponsored by Department of Scientific & Industrial Research, Ministry of Science &… Continue

I have developed (and will keep on updating) Open Access Portal 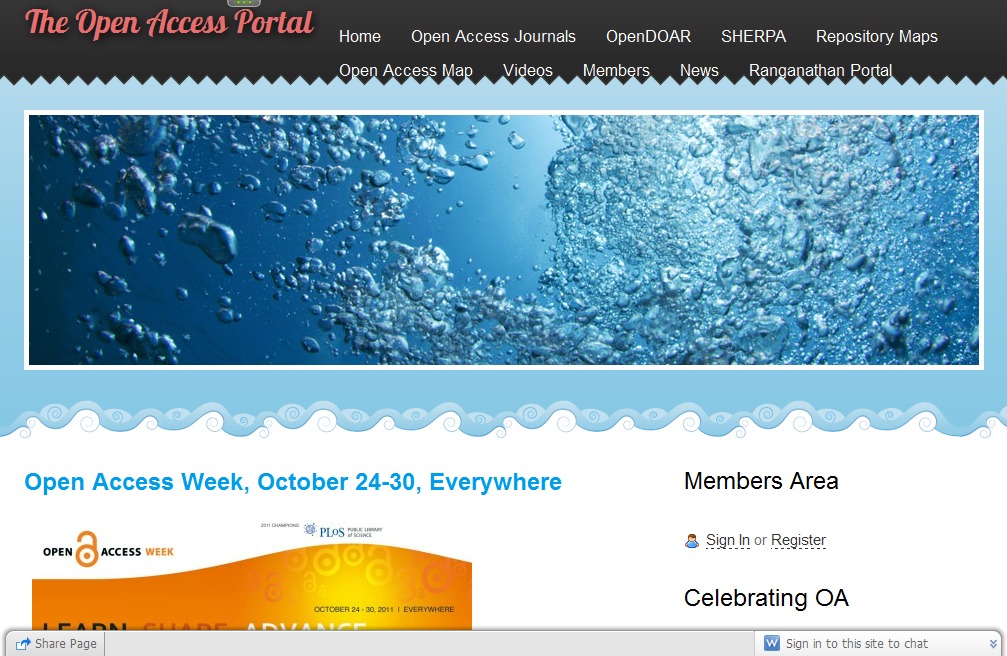 PART FIVE: Uganda, Zambia, Zimbabwe This is the fifth of a five-part series that looks at Open Access repository development in twelve African countries in celebration of Open Access Week Oct. 24-30, 2011. The first part (Botswana, Ethiopia and Ghana) may be found here:…

The Birth of JIDC...A new kind of Journal

There is an old saying that “Success has a thousand mothers and failure has none”. JIDC, I am proud to say, has thousands of mothers, fathers, sons and daughters. Truly, thousands. The success is of JIDC is the fruit of the dedication and hard work of editors, mentors,…

As we celebrate international open access week, the West Virginia University (WVU) Libraries remain at the forefront of global outreach in supporting research through the early adoption of digital library programs as well as sharing their knowledge and experience by providing assistance to schools interested in implementing electronic thesis and dissertation (ETD) programs and…

PART FOUR: Sudan, South Africa This is the fourth of a five-part series that looks at Open Access repository development in twelve African countries in celebration of Open Access Week Oct. 24-30, 2011. The first part (Botswana, Ethiopia and Ghana) may be found here:…

The Dutch Malaria Foundation was founded in 2010. We are committed to a world without malaria. We want to achieve this by combining integrated, responsible pest control with…

Guerilla Open Access: To Be or Not To Be?

Aaron Swartz, Greg Maxwell, et al have been vocal in their support of guerilla open access. While I am all for open access (or else why would I be here, right?), I have my share of doubts regarding the issue of embracing illegal methods to further the cause of open access.

In my third post in the series of posts, celebrating this year's open access week, I take a look into the issue of guerilla open access and why I do not think this is the panacea we are looking for.

Thank You to Cameroon -- Compliments on the JIDC Mentoring System

A couple of weeks ago, JIDC Editor-in-Chief Salvatore Rubino received a letter from a researcher in Cameroon.  The letter from Jane-Francis Akoachere of the University of Buea in…

Make hay when the sun shines!

Not everything is peachy in the world of Open Access publication, and in this next post, I tackle the issue of predatory open access. I have kept it short intentionally mainly because the issue is not something I want too many people to get too suspicious about and hence send out a wrong impression about the whole deal of Open Access. But, at the same time, I want everyone to be aware of what they are getting themselves into and not get duped by posers who are setting the open access…

Thanks to Donna for moderating members and blog posts

I'd like to offer special thanks to Donna Okubo from the Public Library of Science who has been monitoring this site continually for new members and new content, and releasing both from the moderation queue. We unfortunately still need to guard both from spam and spammers and it's a big job to keep an eye on all of the amazing activity on this site. Donna, THANK YOU for keeping the OA Week site alive…

Wicked Solutions for a Wicked Problem -- Help us Empower Students and Hack for Social Good!

From Oct 26-28, during the DIYDays LA conference and Open Access Week, The Workbook Project along with UCLA, FreedomLab Future Studies and the Mozilla Foundation will host a think-tank meets hackathon called Wicked Solutions for a Wicked Problem…

PART THREE: Mozambique, Senegal This is the third of a five-part series that looks at Open Access repository development in twelve African countries in celebration of Open Access Week Oct. 24-30, 2011. The first part (Botswana, Ethiopia and Ghana) may be found here:…

Cross-posted from our blog at http://www.righttoresearch.org/blog/OA_Flyer_Translations.shtml.… 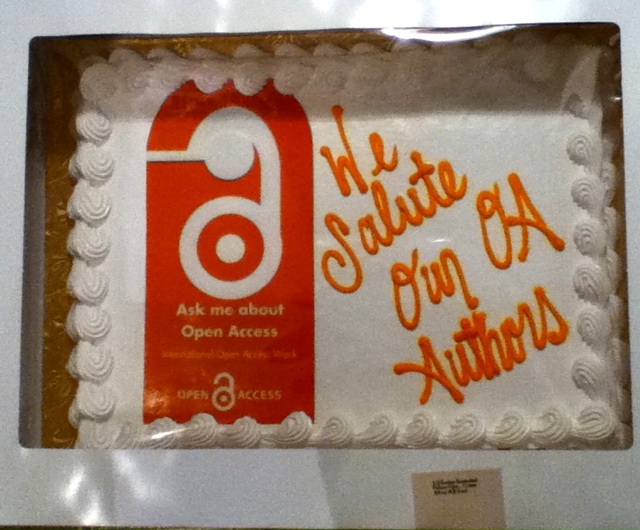 (anyone may use the above photo)…