Tell the White House taxpayers should have access to the results of the research we fund - Act by Jan. 2

As part of the process of fulfilling Section 103 of the 2010 America COMPETES Act, the White House Office of Science and Technology Policy (OSTP) has issued a Request for Information (RFI), asking individuals and organizations to provide recommendations on approaches for broad public access and long-term stewardship to peer-reviewed scholarly publications that result from federally funded scientific research. The RFI poses eight multi-part…

Please join SPARC November 15 for a review of Open Access Week 2011. Participants worldwide will come together for an online discussion to share successes, challenges, and great ideas taken from this year's celebration.…

On November 15, at 1:00pm Eastern, SPARC will host another online discussion through the openaccessweek.org network, to gather participants and talk through this year’s milestones, experiences, and goals for 2012. Please save the date and watch for more post-OA week news from SPARC, the official organizer, later this week.

Thanks to Donna for moderating members and blog posts

I'd like to offer special thanks to Donna Okubo from the Public Library of Science who has been monitoring this site continually for new members and new content, and releasing both from the moderation queue. We unfortunately still need to guard both from spam and spammers and it's a big job to keep an eye on all of the amazing activity on this site. Donna, THANK YOU for keeping the OA Week site alive…

Washington, DC – Open Access Week, the annual event celebrating the global movement towards Open Access (OA) to research and scholarship, kicks off for the fifth time on Monday, October 24.  Coordinated by SPARC and organized by more than 2,000 advocates in countries around the world, the event provides an opportunity to learn about the benefits of Open…

Over 2,000 members belong to the OAW network!

Make sure and post your events, videos, photos, and ideas for 2011!

Registration is free, but required. RSVP by September 29 at http://sparc.arl.org/civicrm/event/register?reset=1&id=90

In 2010, Open Access Week (OAW) was the largest and most successful yet. With just under 900 participants in 94 countries, last…

Are you participating in OAWeek 2011, or just gathering information?

In response to overwhelming demand, SPARC is now welcoming sponsors to the 2011 Open Access Week. Your financial contributions will help make this year's event a huge hit -- and it's a great chance to highlight your company or organization's work for a worldwide audience. Take a look at the benefits here: http://openaccessweek.org/pages/sponsorship

We'll look forward to hearing from you!

At this February 22 event, we hosted a conversation on how to deepen faculty engagement at your institution. Heather Joseph and Jennifer McLennan, representing the Open Access Week organizing coalition (SPARC), presented the theme for OA Week 2011 plus participant feedback from last year and invited your suggestions on how to take the Week to yet another level in 2011.

eIFL put together a great wish list after last week's Webcast conversation. Take a look. What would you add?

Webcast invitation: The (OA)Week ahead

The (OA)Week ahead: Getting started on Open Access Week 2011

Registration is free, but required. RSVP by February 21 at http://sparc.arl.org/civicrm/event/register?id=68&reset=1.

"Open Access promotion and dissemination activities in developing countries should now materialise in a growing number of operating repositories with a critical mass of locally-based research contents which may come of use for solving problems that affect the whole society in those countries."

With thanks to Benjamin Hettig. Details are in the original post at http://www.viewsoftheworld.net/?p=1092. 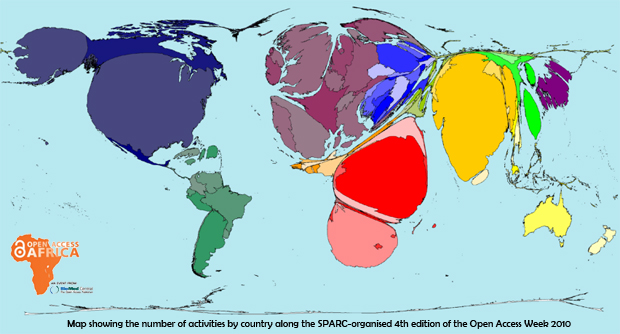 Details on the program for 2011 will be announced in the New Year.

Please complete our survey of Open Access Week participants and let us know how we can help you to make the Week an even bigger, more effective event in 2011.
http://www.formstack.com/forms/?1018715-UtUAzvneer
Your input will really inform the plan for next year, so please complete the survey now -- and no later than November 12.

A letter from SPARC

The largest, most successful International Open Access Week yet has just come to a close. With just under 900 participants in 94 countries, this year’s event was no less than three times larger than it was just a year ago. Hundreds of videos, photos, blog posts, and more were released to promote and highlight the benefits of Open Access to research and take the conversation even more… Continue

In celebration of Open Access Week (October 18-24), SPARC is showcasing the stories of two exceptional families who have embraced Open Access as a value and have advanced their own work – though not always without reservations. The personal stories of brothers Jonathan and Michael Eisen (both evolutionary biologists), along with Neil Buckholtz and his son, Josh (neuroscientists), grappling with the pros and cons of Open Access are now profiled on the SPARC Web site.