Check out Stability: International Journal of Security and Development

Like many people involved with and interested in open-access publishing, I came to find this movement after a particularly frustrating publishing experience. After conducting research in Afghanistan in 2008, I wrote up an article in early 2009. It went to a well-regarded journal and -- after five months of peer review -- was accepted. Revisions were submitted a couple of months later, around October or November 2009. A month or so later, we learnt that the piece wouldn't be published until around September 2010 given a backlog of articles. We noted that, in this field of international affairs, such work is timely and should not be forced to sit on a shelf. Ultimately, when April or May 2010 rolled around, we received an 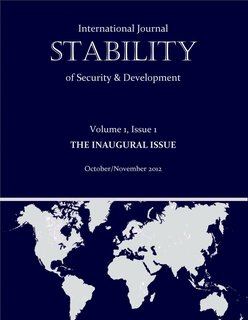 e-mail saying that the situation in Afghanistan had changed so much that our article had been surpassed by events to the point where it was outdated. We agreed and, with some updating, eventually submitted it in another journal where it was published in...early 2011. Thus, field work that ended in mid 2008 was published in 2011.

The situation above is one of several instances in which timely research needed by policymakers, international security and development practitioners and others was unnecessarily delayed. Peer reviews took six months or more. Editors needed to be pushed to get articles through the reviewing process. And the work could ultimately only be accessed by a handful of fellow academics at subscribing institutions. I posted articles publicly on the internet, risking the wrath of T&F, Wiley Blackwells, SAGE and others, but still it was too late. Posting documents online seemed a more effective way of communicating, but there goes any hope of advancement, public recognition or, frankly, being taken seriously.

Thus, a group of like-minded academics who are committed to solid, peer-reviewed research -- and who want to ensure it isn't shelved away in expensive obscurity -- started Stability: International Journal of Security & Development (www.stabilityjournal.org). It has been a learning experience, one in which we have been greatly guided and aided by Ubiquity Press (www.ubiquitypress.com). We are proud to have released our first issue and hope that it will not only feed into an academic debate about violence, conflict, peace, security, poverty alleviation, governance and related topics but also into this open-access movement that so many of you at this site have pioneered. Thank you for your great work, and I hope that you can help get the word out about OA (and about our journal as a great example of low-cost OA publishing).

Hear more about our fist issue at: Stability: International Journal of Security & Development